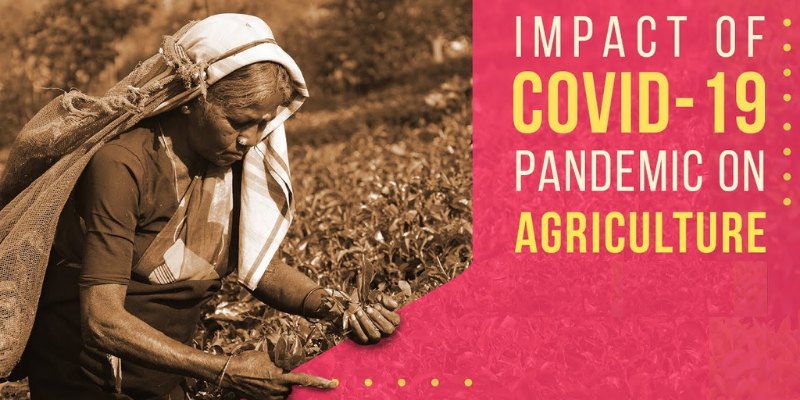 COVID-19 and Social Protection: Impact in the Agriculture Sector

India is the world's second most populous country and also the seventh largest country in the world. Agriculture plays a very important role in the Indian economy as it contributes about 17% to the total GDP and as per over 58% of the country’s population is directly dependent on agriculture for their livelihood.

India holds the title as the world's largest producer of milk, pulses and jute, and ranks second in the production of rice, wheat, sugarcane, groundnut, vegetables, fruits and cotton and also India holds the record for being one of the leading producer of spices, fish, meat and various plantation crops.

Agriculture is the main source of livelihoods in India. About 70 percent of the country’s rural households are still dependent primarily on agriculture as their source of income for their livelihood. India is the largest producer, consumer and importer of pulses globally.

Corona viruses are a large family of viruses that are known to cause illness that range from common cold to severe diseases such as respiratory disorders and death. Coronavirus disease (COVID-19) is an infectious disease caused by the SARS-CoV-2 virus.

Novel Coronavirus (COVID-19) was first identified in Wuhan, China in the year 2019. This was a new coronavirus that had not been previously identified in humans. The virus can spread from an infected person’s mouth or nose in the form of small liquid particles when they cough, sneeze, speak, sing or breathe.

On January 27 2020, the first case of Covid-19 was detected when a 20 yr old female from Kerala, India was found infected with the Covid–19 virus when she was admitted into the Emergency Department in General Hospital, Thrissur, Kerala.She disclosed that she had returned to Kerala from Wuhan city, China, on January 23, 2020.

After it was reported, lockdowns were announced in the Kerala state, and later in the rest of the country. Slowly, the number of recoveries exceeded than the number of active cases. Infection rates started to drop in September, along with the number of new and active cases. Daily cases peaked with over 90,000 cases reported per-day, dropping to below 15,000 in January 2021. A second wave beginning in March 2021 was much more trouble causing than the first, India ran short on vaccines, hospital beds, oxygen cylinders and other medical supplies in various parts of the country and later India began its vaccination programme on 16 January 2021.

Covid 19 impact on the Agriculture and Food Industry in India

The Covid Lockdowns had a great impact on the country’s food industry as the government had to close down restaurants and bars to slow the spread of infection. Restaurants' daily traffic dropped rapidly compared to the previous reports. Closures of restaurants caused a ripple effect among related industries such as food production, liquor, wine, food and beverage shipping, fishing, and farming industries.

Covid-19 pandemic has disrupted the Indian agricultural industry in a devastating manner. It has disturbed the physical, social, and economic situation of all the stakeholders of Indian Agriculture Industry. The Central Government of India tried to turn the crisis into opportunity by announcing many measures and long-pending reforms.

As a protective and preventive measure, the Indian government ordered a nationwide lockdown, which had a severe impact on the country’s economy including agriculture. Post-pandemic, the agriculture sector registered positive growth but less than its immediate past quarter growth witnessing a decline due to the impact of COVID-19.

The labour migration led to scarcity of labour which affected harvesting of the winter crops like wheat and pulses adversely in the intensively cultivated north-western plains of India. Secondly, the restrictions on movement disrupted the supply chains, resulting in disturbance of the uninterrupted flow of inputs for and outputs of agricultural activities.

Supply of commodities were affected more, challenging the food and nutritional security of the vulnerable sections of the society. Huge stocks of rice and wheat supplemented by a record harvest in 2019–20 crop season enabled the Indian food system to tackle the pandemic.

At the same time tonnes of food grains were wasted, according to a government report, at the Food Corporation of India (FCI).

COVID-19 has exposed vulnerabilities and power imbalances in the Indian agricultural system for learning and building resilience against future shocks. Uncertainties imposed by the crisis, restrictions on inter-state movements and absence of transportation disrupted the food supply chains and spiked food prices and affected farm operations.